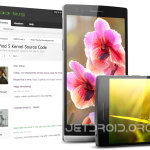 Although Android – being released under the GPL licence – demands all manufacturers to make their modified sources public, not everyone does so. Mainly the major brands like Samsung, Sony, HTC and Motorola make sources available. Many smaller vendors and especially the ones from China show little interest in opening their sources. Now Oppo joined the group of open source friendly Android adopters by opening parts of their Find 5 source code.

What was made available on Github is the kernel source of Oppo’s flagship model Find 5. While this is a good first step it does not open everything that is needed to compile Android for the Find 5 from sources.

In an Android system only part of the hardware interface can be found in the kernel. Also the system contains device specific libraries – you could think of them as drivers. Examples for this are sensor libraries, camera drivers, key mappings or 2D and 3D hardware acceleration components. If not released by the manufacturer, many of these can be taken from similar devices or from the chipset manufacturers. The problem is that having to collect all bits and pieces makes the ROM modding much more difficult. However, it is much better to have the kernel than having nothing. Unfortunately Oppo is not the only company opening only limited amount of their sources. Almost complete sources are only available for the Google phones.