Huawei has added additional phones to their bootloader unlocking website. On this website you can enter a devices serial number and IMEI to request a code that enables unlocking a smartphone bootloader. After requesting a code via this website Huawei promises to send the the unlock code via e-mail within three working days. 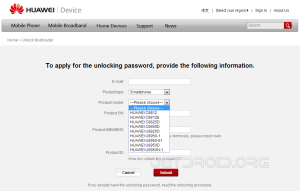 Once an unlocked bootloader is available it is possible to flash custom ROMs, modify the recovery system and get root access. However, that does not come for free. Huawei seems kind enough to not void the warranty by unlocking but their disclaimer states that OTA updates and listening to DRM protected content will no longer be possible. But there is surly a way around this, too. Happy hacking!

One comment on “More Huawei phones get unlocked bootloader”