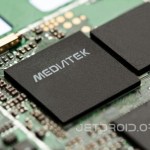 Along with the availability of first Mediatek dual-core MT6577 phones the news of a quad-core successor came up. At first this chipset was said to be released end of 2012 and it went by the name MT6588. This seemed to make good sense as MT6588 is a good successor name for the MT6577 dual-core.

Mediatek however seems to have changed their plan now. While there is still no official sign of any quad-core chipset on the MTK website they have semi-officially announced that their new quad-core platform is to be released beginning of 2013. Together with the slight delay they also changed the name to MT6589.

Aside form the name change the spec remains the same as before. The new processor will a quad-core ARM Cortex A7 manufactured in 28 nm CMOS process. Support for fast LPDDR2 memory will be included. Along with the four processing cores it is supposed to have a PowerVR SGX544 GPU with a fillrates of 55 MTriangles/s and 1600 MPixel/s. Thus there should be enough processing power for 1080p video playback on HD screens. MTK recommends display resolutions up to 1280×720 and supports cameras up to 13 MP.

Another interesting information concerns the data network support. It is said that the new chipset is first to be released in a 3G version supporting both WCDMA and TS-SCDMA (dual-network). A 4G version is reported to follow mid of 2013 supporting both FDD-LTE and TDD-LTE. Sounds like 2013 is going to be an extremely interesting year with first Shanzhai LTE phones hitting the stores.

I very much hope that the newly announced MT6589 means an end to the rumours about an octo-core being released by Mediatek in 2013. If not even on desktop PCs or Notebooks there is a use for 8 cores, how should it make any sense for mobile devices. Thus I hope the octo-core rumour was referring to a quad-core ARM with four graphics units – this would make much more sense. But who knows what MTK is preparing. They are always good for a surprise …