No December – How Google stole Christmas

As much as I am happy to immediately install all updates that Google provides for their Nexus devices was I shocked to hear about this nasty bug they built into the Android 4.2 release. In the middle of November, right before Christmas time did the contact app forget there has to be December between November and January. Skipping December would mean no Santa Claus, no baking cookies, no laying presents under tree, no Christmas. What an evil assault on the western civilization. So far only the Grinch was known to be so mean. 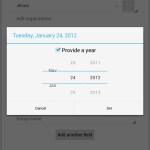 The contact editor in the new Jelly Bean 4.2 update makes if difficult to enter dates that lie in December. 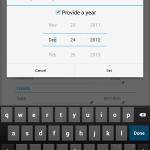 December dates can still be entered using the onscreen keybaord.

Strangely this problem only applies to date entry fields in the contact editor. And fortunately also, that there is a way to sill enter dates that lie in December. Just use the onscreen keyboard and type the month, that’s it. So, is this too much noise about nothing? Maybe, but it still leaves a stale taste to installing operating system updates. Maybe I was not too much aware that every update may also introduce new errors. Now I am going to be more sensitive to that.

While writing this Google admitted the existence of this bug in a Google+ post. They promise to fix it but don’t give any indication when this fix will be available. Until then you can still circumvent it using the method described above.