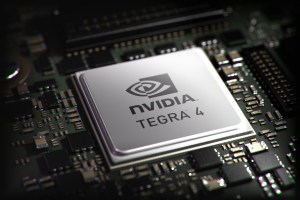 Nvidia has made an end to all the rumors around their upcoming Nvidia Tegra 4 platform. What they presented ahead of CES proved the rumors on the chipset previously known as Wayne to be quite accurate. Nvidia – obviously not shy about their new product – boldly claims to be working on the “World’s Fastest Mobile Processor”. But not only this, it is also said to contain the first quad-core implementation of ARM’s Cortex-A15.

Besides the four main processing cores the new design also features a second-generation battery saver core for low power consumption in standard use or standby. Also targeted for maximum energy efficiency is the included (but not further specified) PRISM 2 Display technology that  is said to reduce backlight power consumption. Most likely thanks to a step from 40 nm (Tegra 3) to 28 nm CMOS technology the new Tegra 4 aims to consume up to 45 percent less power than its predecessor. This should result in up to 14 hours of HD video playback on Tegra 4 equipped smartphones.

In order to deliver up-to-date high-speed graphics performance the new platform features 72 instances of Nvidia’s GeForce GPU resulting in around six times the GPU power of Tegra 3. Although this can be expected to be a big improvement in 3D power for gaming and 4k high-resolution displays it remains to be seen how this positions the Tegra 4 among its rivals.

Another interesting fact about the Tegra 4 is the emphasis that Nvidia puts on it photographic capabilities. What they call their new “Computational Photography Architecture” is said to automatically produce high dynamic range (HDR) photos and videos by connecting the power of their GPU cores to the camera’s image-signal processor. Most likely this is some special software that takes raw data from the image sensors and pipes them though the vast GPU power. Especially as really good image quality of smart phone photos is scarse this could really end up being an interesting feature. As Nvidia has previously been known for graphics cards and mobile processors their presentation of a 4G chipset for LTE data and voice connectivity can be surprising. It does however close a gap in their portfolio as the Tegra platform was always lacking connectivity chips of its own. To overcome this Nvidia bought the small British venture Icera back in 2011. Icera’s expertise is in soft-modem chipsets for wireless communication. With the Icera acquisition Nvidia was now able to present the fifth-generation Icera i500 processor as a companion chip to the Tegra 4 processor. The i500 features worldwide 4G LTE voice and data support while – thanks to its soft-modem concept – being 60 percent smaller than conventional LTE modems. Compared to its predecessor the i500 has increased the processing capability by a factor of four.

Overall the Tegra 4 has much to offer and with the addition of a LTE chipset and the new photographic powers it should result in mobile devices to be excited about. Stay tuned for first benachmark results and device reviews.