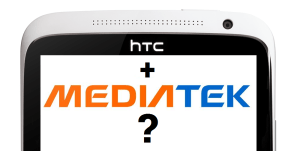 Will there soon be HTC phones with Mediatek chips?

While I am usually not a big fan of rumors on potentially planned phones this one really has an interesting twist. Gizchina spread the news that HTC might be working on MTK based phones for the chinese market. The reason why this would in fact be an interesting circumstance is that it could mean good quality phones for affordable prices – sounds like heaven on earth.

As both HTC and MTK are Taiwanese companies it is a bit like putting one and one together that sooner or later these two might cooperate. If it were true, this would mean a major turn in HTC’s strategy. So far they have been very loyal to Qualcomm and the only other mobile platform that made its way into HTC was ST-Ericsson’s Nova Thor inside the HTC Sensation Z710T. For sure it was even not easy for HTC to build this phone with the ST Ericsson chipset as Qualcomm can be expected to have put up pressure to keep HTC loyal to them.

Although Qualcomm does not want to leave the low-end smartphones entirely to others their prices/performance ratio can be expected to be significantly lower than what MTK can offer. HTC on the other hand is under pressure to turn the downward trend of declining phone sales. Building phones with the MTK recipe might be the right measure to counter this trend. Funny thought, that there are already plenty of MTK based phone with HTC labels on the market – all ShanZhai phones. Thus it remains to be seen whether or not HTC will really use the MTK platforms and if this ever happens, how these phones manage to compete against the flood of HTC copy phones.